GB 7231 is a pipe marking standard for Chinese pipes used in industrial situations.  The standard covers a variety of things including the colors, symbols and other marketing specifications necessary for safety.  The standard goes into great detail regarding what needs to be used when marking pipes whether they are carrying harmless things like water or potentially dangerous chemicals.  When used properly these markings can help ensure people working with or around these pipes are much safer as well as helping to keep the environment safe from spills.

When pipes are carrying chemicals, for example, the standard lists exactly how they should be labeled so everyone is able to quickly see what it is that is contained within the pipe.  The label must contain either the full name of the chemical or the complete chemical formula.  Abbreviations are prohibited because of the fact that not everyone will recognize what the abbreviation stands for.  The full name or chemical formula should be well known to everyone working in the area, and even for those who don’t know what it is they will be simple to look up without risk of getting confused for something else.

For pipes carrying hazardous materials the standards require that on each end of the pipe there is a 150mm yellow ring with black bands.  The black bands should be 25mm and on both of the edges of the yellow markings.  This is an easy way to quickly identify pipes carrying potentially hazardous materials even if you don’t know exactly what those materials may be, it is a great way to avoid an accident.  When people see this specific marking, for example, they will know immediately that they should not be working with this pipe without the proper equipment and safety clothing on.

The standards also tell people how pipes should be labeled to ensure everything is clear on the pipes.  Things like having the labeling repeat every 10 meters as well as having the labels placed at either end of the pipe are great ways to ensure that no matter where along the pipe someone is, they will always be able to see the labeling clearly.  The standard also requires a label be placed at each pipe bend or t junction so there is virtually no risk of people missing the labels while using the pipe or working on it.

This standard is well thought out and covers just about every scenario people could run into when working around industrial piping.  It is a great way to help anyone working in the area to avoid making common mistakes.  With so many pipes in any given facility it is easy to see how someone could turn a valve thinking it was for water, only to realize later that it was a dangerous chemical because they were at the wrong pipe.  Avoiding these types of mistakes is made much easier when facilities follow the GB 7231-2003 standards. 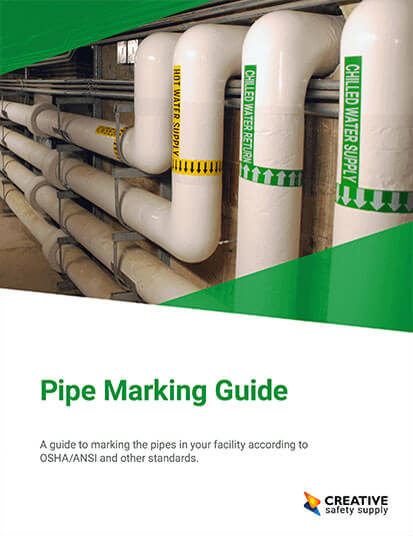