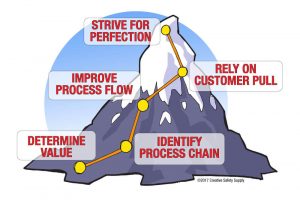 Several years ago, I was working as a project manager for a local manufacturing company. The owner asked me how much I knew about lean, and I told them I had about three years experience working on a lean transformation in upstate New York in which we had to completely change the factory climate from a “this is how we’ve always done things” kind of mentality to one of continuous improvement and individual and team accountability.

We evaluated the problem, focused our attentions to areas of immediate concern, and drew the staff working in those zones into our circle. With their help, we implemented some systems where we could make some immediate headway and demonstrate to those folks that by changing things around, their lives would be a little bit less harried and they could show their bosses increased profitability.

Let me be honest here, those first four or five months were extremely difficult as it was really hard to get some of the workers on the floor to buy into the new program.

Frankly, in this particular factory, a lot of these guys were used to just sitting at a station and watching the product zip by. They only had to get up and work every ten minutes or so, and then only for about five minutes at a time, so when we implemented some of our lean tools to their work routine, it meant that they would now have to get up for about ten minutes and only be able to sit five minutes.

Boy, did this make a lot of the long-term guys really mad! You would think that a guy would prefer to work for his paycheck (and not too bad pay, for today’s reckonings), and gain some satisfaction knowing that this new way would ensure their job security and possibly even eventually boost pay, but I’d say that almost 2/3 of the workers on the shop floor were resistant for several months. They would complain and even had the nerve to make faces behind my project manager while he was talking.

After a lot of diplomacy and even removing a couple of the real troublemakers (to different positions in the factory, not fired), we managed to restructure some of the work dynamics so that we could pair each group with some of the more positive-minded workers who we gave more leadership responsibilities over the rest. This took a lot of strategy and negotiating. We had to court some of the potential leaders, find out their influence with their coworkers and convert them to our lean way of thinking.

This took about a year and a half to get some kind of flow going within that group, but we started to make leaps after attitudes changed.

After hearing this anecdote, the factory owner at the beginning of this post who originally asked me about my experience decided his management and workers could benefit from my ability to strategically restructure workers into pro-lean groups, and I got my own project management contract.