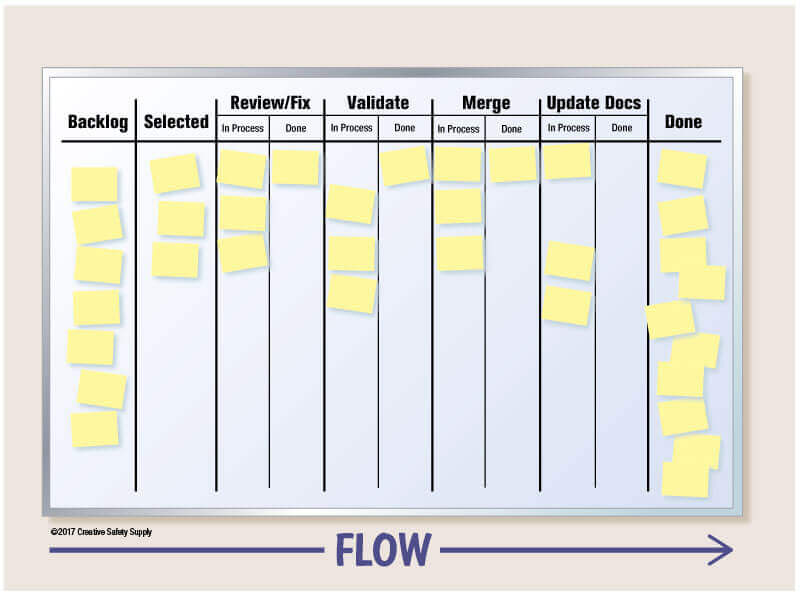 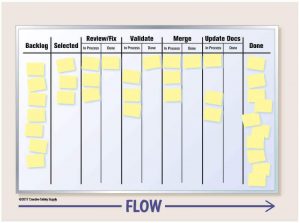 Kanban systems are an important scheduling system used in ‘just-in-time’ production facilities.  The word Kanban actually means signboard or billboard, and with these systems each part or product is only supplied as it is needed.  This critical part of the just in time method of manufacturing helps to eliminate waste in a variety of ways which is then intended to help improve the value given to customers, and in turn increase profits.

The concept behind the Kanban system is that when a particular product is gone, or gets low enough in inventory to require restocking it will produce a Kanban card.  This will signal the responsible areas to create and supply more of this product.  The Kanban card could be a physical card which is handed off to the other area, or it could simply be any type of signal which alerts the other group of the need.

The goal is to avoid having an oversupply of any one product which will contribute to waste.  If, for example, a facility makes parts using widget A and they make about 1000 of them per day, they will want to set their stocking levels based on their need.  In this case if widget A is easy to produce and doesn’t take much time than they may want to keep just a few hours of what they will need on hand.  When they are nearly out of them they can trigger the Kanban card to let people know that they are ready for more.

At first glance this type of manufacturing may not seem like a significant improvement, but when you learn that in many cases the parts needed change or the orders that are coming in are adjusted you can see how it would greatly cut down on waste.  Rather than having all 1000 of widget A in the example above produced, only to have them removed when another order for widget B takes precedence, the Kanban practice limits what is at hand to avoid the wasted time of moving and restocking items.

This can result in significant overall improvements in efficiency for everyone involved as well as avoiding the actual physical waste of any unused products. It is important to make sure, however, that the Kanban system is put in place at the proper levels.  When these things are not considered ahead of time it can actually cause waste.  Using the example from above if the Kanban card is triggered when the production floor gets down to 10 widgets available, but it takes 30 minutes to produce a new batch of them than it will often result in the production team having to wait idly  until they are produced.

While it can take some time to get the exact levels set at the right amounts, the Kanban system can save a significant amount of time and greatly improve efficiency for the entire facility when properly implemented.  When considering this type of system in any manufacturing process it is important to take the time to work with everyone involved in the production process to ensure no detail is missed.