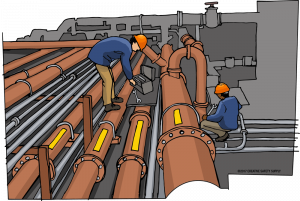 It is not uncommon while walking through any type of factory, refinery or other facility to see liquids dripping from pipes or other areas.   Disturbingly, however, in many cases the liquid which is leaking out is toxic or hazardous to the health of the people working around it or the environment in general.  In some cases it can even be flammable which presents a significant risk to the facility as a whole as well as everyone working in and around the area.

Finding, tracking and repairing all of these leaks in a huge facility can seem like an overwhelming task, but it is an important one which needs to be taken on.  Not only because of the safety of the facility, but also to ensure you are staying within compliance of the EPA and other governmental regulations.  Fortunately, however, there are ways to detect leaks and get them repaired quickly and effectively.

It is estimated that there are between 3000 and 30,000 individual components in an average sized facility which are at risk of leaks.  Pipe fittings and other areas as well as any faucets exist are some common ones, but there are many others as well.  Going through every inch of a facility and marking each of these areas clearly is a great way to start.  There are a variety of different stickers and other items which can be used to draw attention to these areas of potential problems.

Using color coded pipe markings you can identify exactly what types of liquids are going through each pipe and where the potential issues are.  You can then set up a regularly scheduled inspection period to see if any of the marked areas are starting to leak.  Any area which has a potentially dangerous material going through it should always be inspected much more often than other items.  Tagging and inspecting these high risk areas is a very affordable way to keep an eye out for leaks and having them fixed as soon as possible.

Depending on what type of liquid is going through particular pipes it is important to do more than just market them off to be checked on a scheduled interval.  When there are hazardous materials being moved through pipes it may be necessary to have active monitoring for leaks.  In many situations it is possible to have automated alarms which will trigger when they are exposed to liquids.  This is a great way to ensure that when leaks occur they are dealt with quickly and safely.  Most leaks start off very small so finding them early is key to keeping everyone safe.

By using automated or computerized monitoring systems your facility will have a much better chance at preventing problems before there is any significant danger to the people working in the area or the facility itself.  Leak detection and repair is an important part of running any facility and when it is done right it can mean the difference between a safe working environment and one which puts the health of everyone in the area at risk.