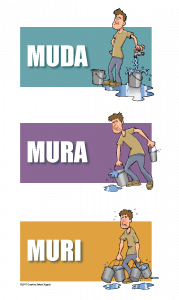 The Muri Mura Muda concept is a set of ideas or guidelines that should be used to help develop your 5s lean efficiency standards.  These concepts are not strict rules, but they should be used to help create the standards and rules used in your facility to help improve your overall efficiency.  Each of the three words are Japanese in nature and developed by the Toyota company when trying to improve their business and profitability.  When looking to improve your facility it is a very good idea to look at this important concept.

Muri Mura Muda concept can be broken down by each of the three words before looking at it as a whole standard.  They are all similar in their meaning, but different enough to stand on their own.  Take a moment to read through the ideas behind each of these important terms.

Muri, which means ‘unreasonable’ in Japanese can also stand for overburden, unreasonableness or absurdity.  The idea behind this term is that you should always avoid any ‘Muri’ work which will result in an unreasonable amount of waste.  The waste can be in time, materials or effort.  One excellent way to avoid Muri (or waste) is to standardize work so there is a specific process which has been tested and found to be extremely efficient.  A great example of this is the assembly line where each individual on the line is responsible for performing one task.  Since they are repeating the task many times they can perform it much quicker and with fewer errors than if they had to learn each station on the line.

The assembly line, however, is not a true example of Muri, but rather an ideal situation for multiple Muri tasks.  Each individual station on the line would have to go through the Muri process to become as standardized as possible to ensure maximum efficiency of the entire process.

Mura is a Japanese term which can mean unevenness or inconsistency, primarily with physical matter and the human spiritual condition.  This step of the efficiency process will help improve the overall process by attempting to reduce or eliminate the storage of parts and other equipment before they are needed.  Essentially it is setting up any process to avoid time where people, parts or equipment is just sitting around waiting to be used.  By using a ‘pull system’ where each step of the manufacturing process is triggered by the completion of another you can virtually eliminate wasted time.

A general Japanese term which describes an activity which is wasteful or doesn’t add value.  With any facility it is helpful to eliminate any tasks which are done that don’t add direct value.  Adding value could occur by helping to complete a project such as assembling parts or it can be something that is less direct.  While sweeping up a factory does not directly add value, it is necessary in order to have a safe and efficient work environment so it is adding indirect value.

Tasks that can, and should, be eliminated under the Muda concept would be things like moving equipment from one place to another simply to get it out of the way.  A better solution would be to find the ideal location for the equipment so it can stay in one location throughout the process.