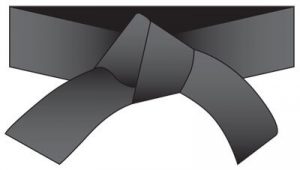 Six Sigma is a process which is used by many companies throughout almost every industry. The goal of the Six Sigma process is to improve the way things are done, and to allow the same processes to be completed using fewer resources such as time, space and money. There are four different levels of Six Sigma training, represented by belts. The yellow belt, green belt, black belt and master black belt can be earned through a process of completing training and other tasks to achieve these levels.

The Six Sigma Yellow Belt is the lowest of the levels within an organization. In most cases an individual at this level has taken basic training classes so they are aware of how the Six Sigma process works, but is not part of the management team. People at this level are typically involved in the implementation process, but this is not their primary role. Six Sigma projects will be tasks which they are assigned in addition to their normal day to day responsibilities.

The Six Sigma Green Belt is given to someone who has completed the training and certification process, and are regularly given tasks associated with Six Sigma projects. They may lead some Six Sigma projects, and will also implement the processes on a given project. Most often they will be team members of a project, but when necessary will lead their own projects as well. Many people who have their Six Sigma green belt spent a significant amount of their time working on these types of projects, but can also have additional responsibilities.

The Six Sigma Black Belt is given to someone who is fully trained and completed all the necessary exams related to this process. Their job will be entirely dedicated to Six Sigma processes, and don’t typically have any responsibilities outside of this role. They are involved in providing training and mentoring of people who are just starting out in the Six Sigma process, as well as those with their Yellow or Green belts. Black Belt holders typically lead most projects, and help to guide the project through to completion, working with other black belts as well as people with yellow or green belts.

The Six Sigma Master Black Belt has achieved the highest level of expertise in this process. They are dedicated entirely to the process and don’t have any added responsibilities outside of those required by the Six Sigma methodology. They are directly responsible for providing training to those with lower ranking belts and leading all projects. Most master black belts are experienced and successful managers or CEOs of Six Sigma companies.

Achieving each level is a difficult task, but it is well worth the effort that is put in. Those involved in Six Sigma companies find that those with higher belts are willing to assist and provide training and mentorship whenever possible. This is largely because they know that the higher ranking each person achieves, the better each project will go.